So, now it’s finally been printed, I can look back and think ‘the calendar didn’t seem that tricky this year…’

Getting the photos together for the WGW calendar has become an annual challenge of coordinating cooperative greyhounds and competent handlers in the right place at the right time.  Sometimes it all works out beautifully and sometimes…it just doesn’t.

Here’s my quick look back on the highs and lows of the photos for 2017.

In case you haven’t seen it yet, the theme for the year is ‘signs of the zodiac’ with each star sign being subtly (or not so subtly) alluded to in the form of a photo of a beautiful greyhound/

I was struggling with ideas for Capricorn – what do goats do? Climb on things and wee in their own mouths apparently – this wasn’t a good basis for a greyhound picture.  And then I noticed the Greyhound Pub in Shepperton – perfect!  First attempt was the distinctly goat-like greyhound, Vera.  Goat-like as she stubbornly refused to look anything other than very unhappy at being there.  Perhaps this was my fault for likening her to a goat in the first place.  We tried again with the lovely Vicky (ably assisted by Ann and Tanya – thank you) who again insisted on looking quite miserable.  Too embarrassed to go back to the pub a third time with a miserable greyhound, I went back to the drawing board, or indeed the internet and found the Goat Pub in Clapham.  This pub was also happy to have dogs inside the pub and happy to be used for photos.

Armed with top pub dog, Wily and top hound handler, Janie, we visited one lunchtime to find the Goat completely empty except for a friendly and happy lady working behind the bar.  We were free to wander the huge pub and photograph biddable Wily in a variety of locations and poses.

The one of him in the doorway didn’t make the calendar in the end but is one of my favourites.  I liked the symbolism of the New Year / in and out of the door thing but accepted the argument that he didn’t look like he was in a pub and that my wishy washy symbolism stuff was nonsense! 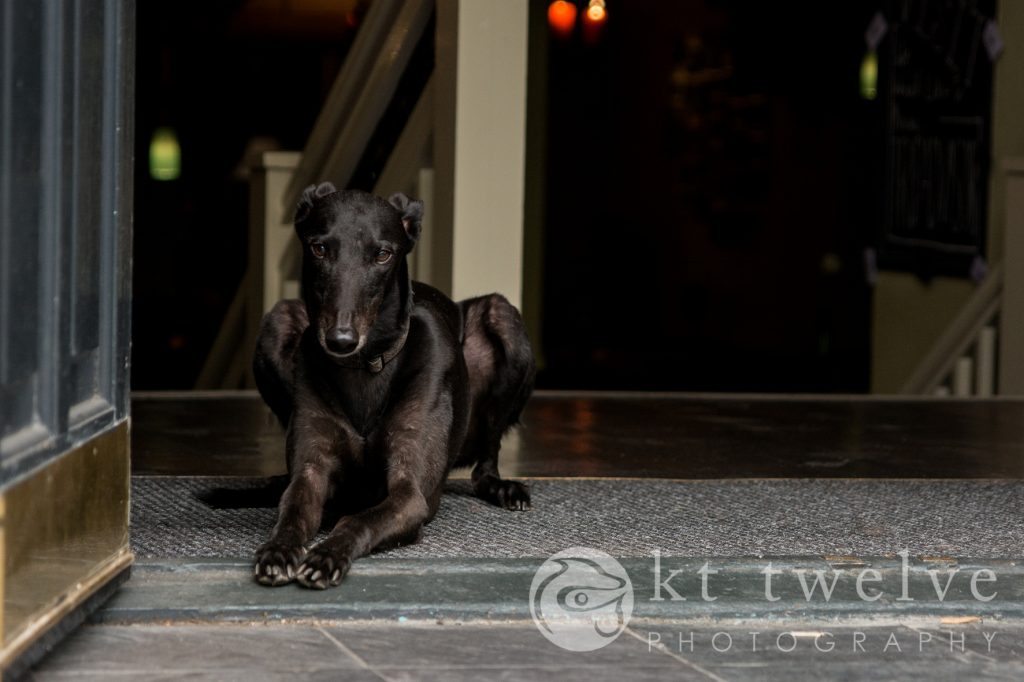 Wily in the doorway of the Goat

This was also the location for the cover shot of Wily – gazing lovingly at Janie with the chandelier in the background. 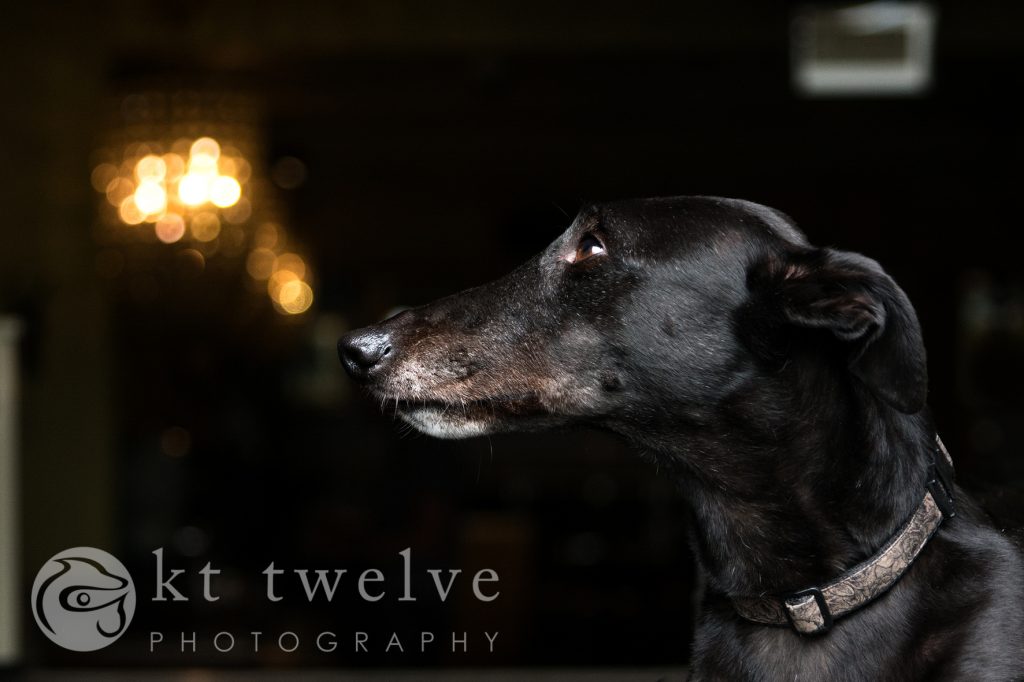 February made us shiver…handsome blue Brody was the original intended model for the water shot but the poor boy was terrified of the hose pipe and then developed a nasty bronchial cough that meant he couldn’t get wet.  Fortunately, Shiloh stepped in the final shot.  I wonder what happened to her… 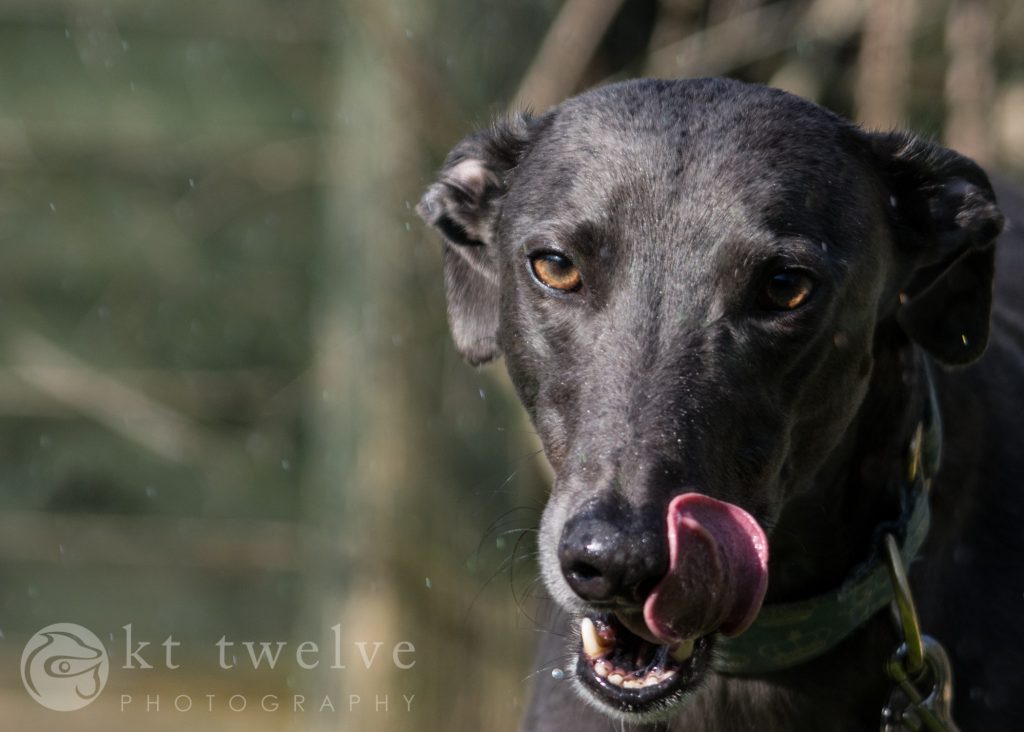 The year was getting on by this point and I had in mind a cold, grey looking day for Pisces – along with handsome black and white boy Pablo as my model, who I thought would stand out wonderfully.  Unluckily for me (but luckily for him) Pablo was reserved the day before he was due to be dragged out for a photo shoot so Denise and I took handsome Logan instead.  Logan was very patient with us as we wandered around Chertsey Meads looking for suitable locations – Denise sweating heavily in her fishing cape.

In the end, we didn’t use this shot.  Instead, we re-did it at Laleham with Debbie kindly bringing Logan along very early in the morning to catch the sun rising over the River Thames. 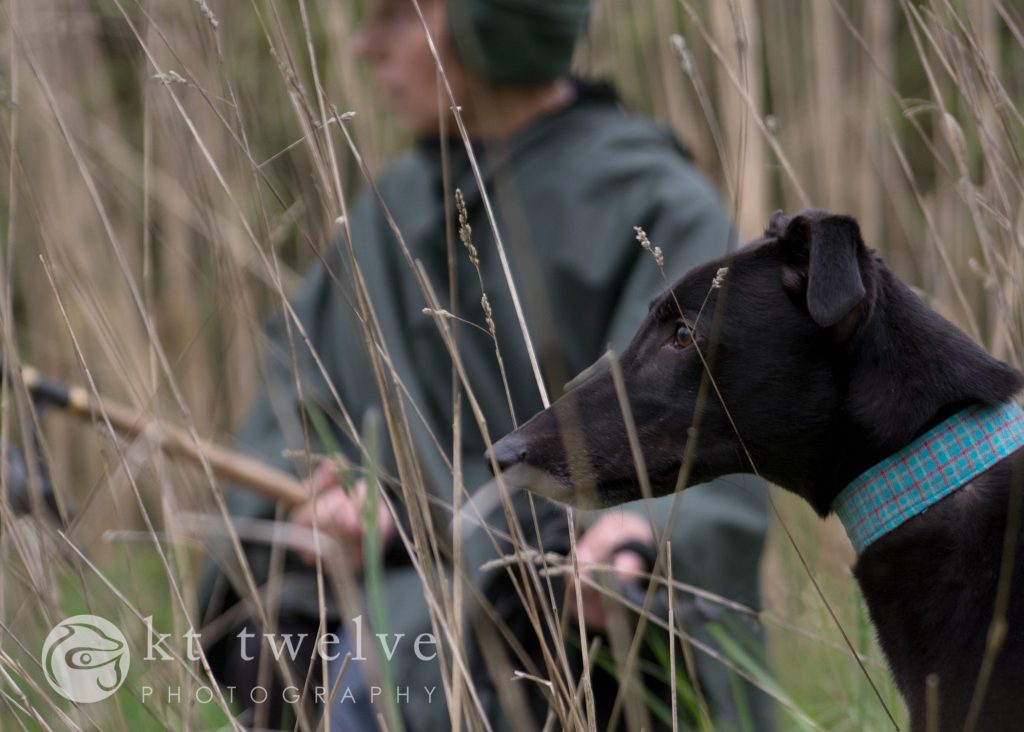 The Ram Brewery in Wandsworth was the only inspiration I had for Aries.  Unfortunately, it has closed now and is being redeveloped.  I sent an email to the developers on the off chance that there was some part of the former brewery that might be suitable (and of course assuming they would be willing to help!)  In fact, beer is still being brewed on the site to maintain its record of being London’s oldest brewery and John was more than happy to show me round the wonderful old stables where, at one point, up to 40 of the horses that pulled the drays around London were stabled.  You see?  This calendar thing can be very education.

These dirty old stables called for a sleek and shiny greyhound – and Remy was just perfect!  Thank you Sharon and Richard for bringing her along. 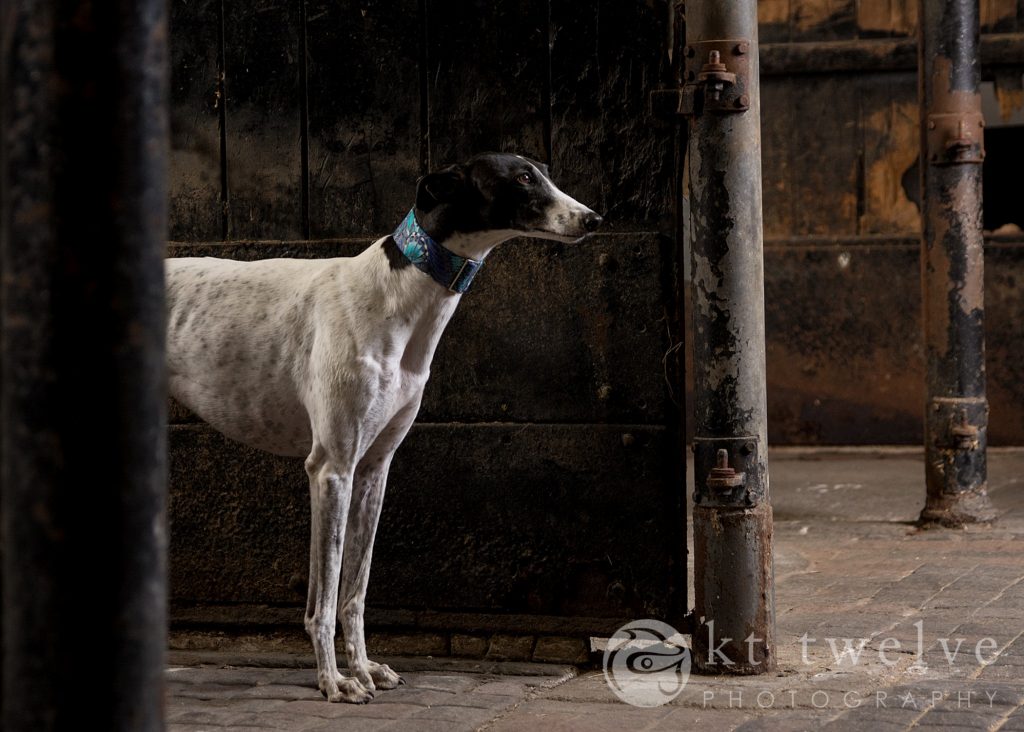 A bull in a china shop seemed like an obvious shoot to go for to represent Taurus.  Less obvious was finding an unsuspecting china shop to allow a greyhound to act out this theme!  In the end, Jack was photographed amongst the kitchenware at Garson’s Farm. 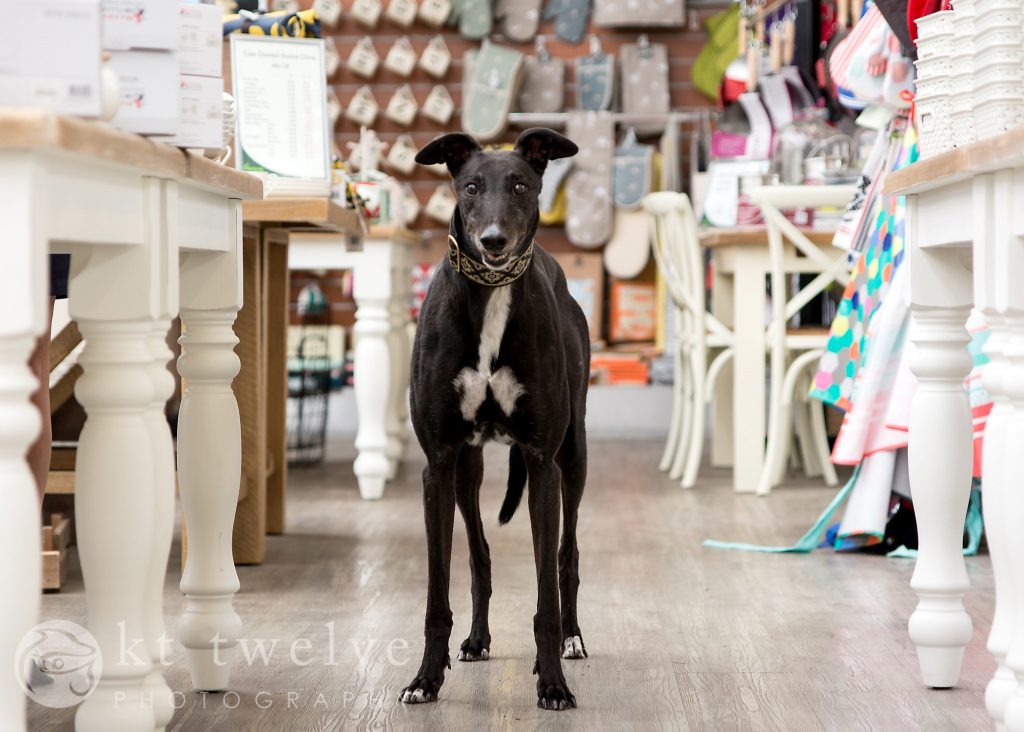 Dan and Simon were both rehomed in September last year and I was struck at the time how alike they looked with their stripiness and little white noses.  Dan was in the kennels on holiday and Simon was available – so we went off to Richmond Park for some photos. Wonderful. 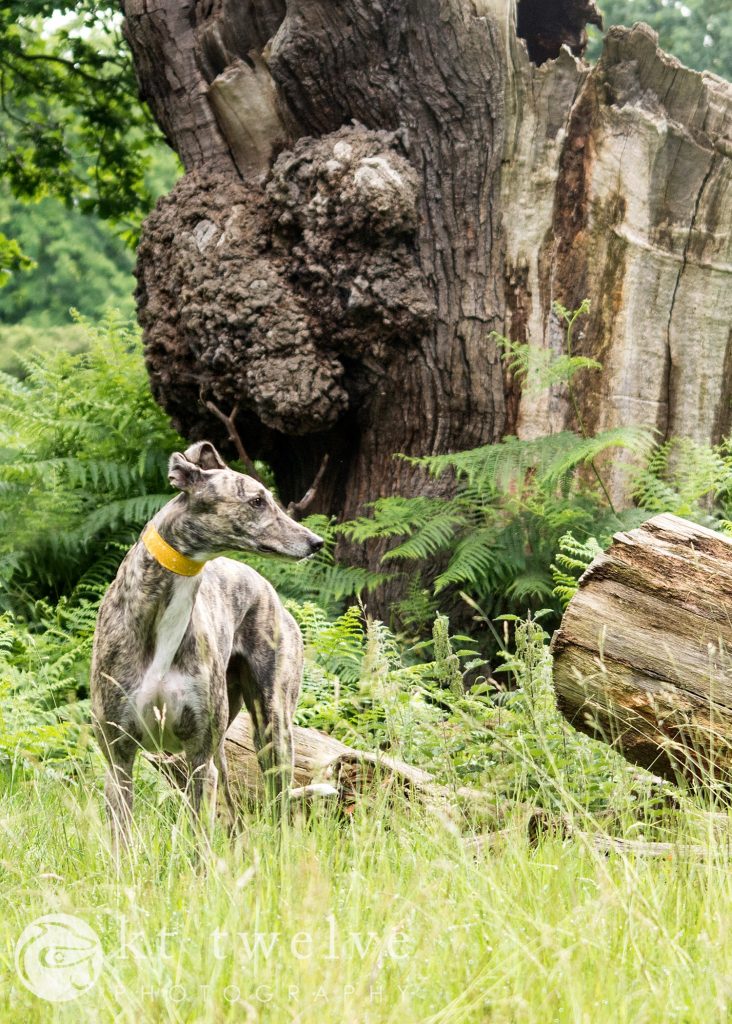 Sun, sea and sand were all that were needed for this shot.   Well, we got the sea and the sand anyway.

We had some glorious sunsets over the summer.  We thought that the evening we picked for a stroll around Bushy Park wasn’t going to be one of them – but enjoyed an hour or so wandering around chatting to the deer.  Then, just as the sun was about to set, the cloud cleared and my gorgeous Piper was illuminated in a little halo of golden light.  She doesn’t really look much like a lioness, more like the timid prey she is meant to be hunting.  But she tries hard and I love her. 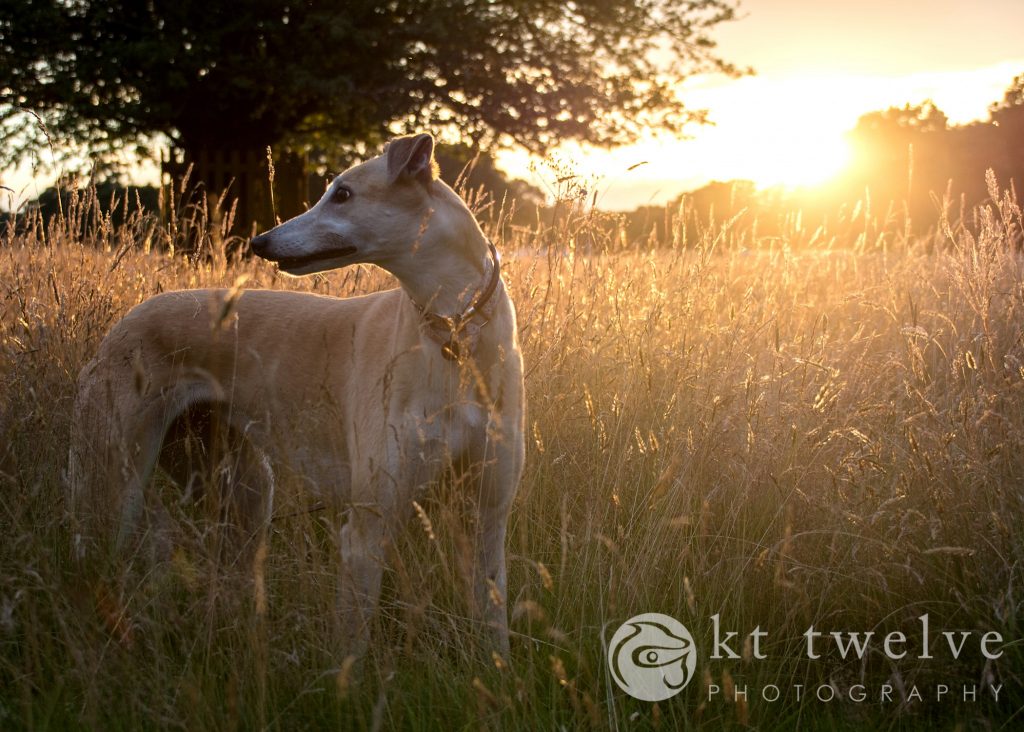 How do you portray a virginal greyhound?  I was thinking originally of just a greyhound in a field of daisies – daisies being the flower symbol of innocence of course – and then added in the church idea when I realised that daisy season was over and I still hadn’t got the picture we needed.  We took along a string of virgins for this –  Wish, Cynthia and Daisy all tried this one – with Cynthia being chosen for her wistful, waiting look (or left in the lurch as it ended up). There is a theory that the phrase ‘left in the lurch’ derives from being ‘left in the lych’ a lych gate being the roofed gate seen at the entrance to some churchyards.  The theory goes that jilted brides would be ‘left in the lych’ when the errant bridegroom failed to appear for a wedding.  Poor Cynthia. 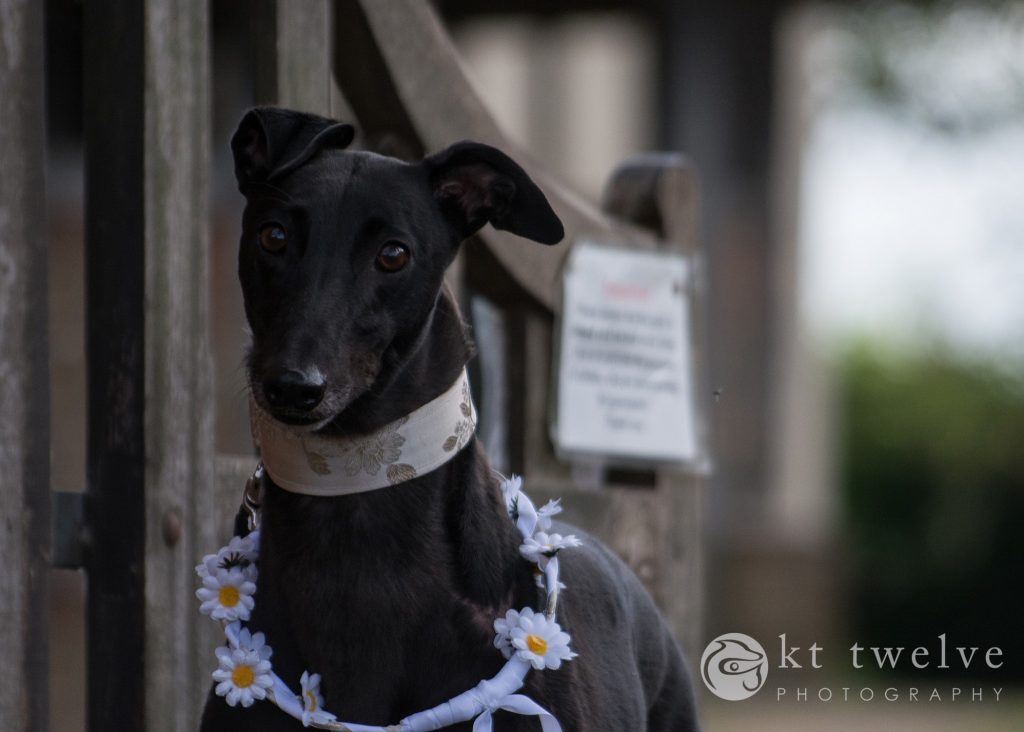 Wisley Church is a pretty little church and well worth a visit.

My parents have had these old scales for as long as I can remember.  They’re very heavy so it seemed easier to take the greyhound to the scales (in Buckinghamshire) than bring the scales to Hersham.  I hadn’t reckoned on Roy’s travel sickness though.  He was sick in the car on the way there, poor lad. I tried not to feed him but, inevitably, he had a few mouthfuls of sausage and so was sick again on the way back.  Poor lad.  I think he has ended up being my favourite picture in the calendar though. 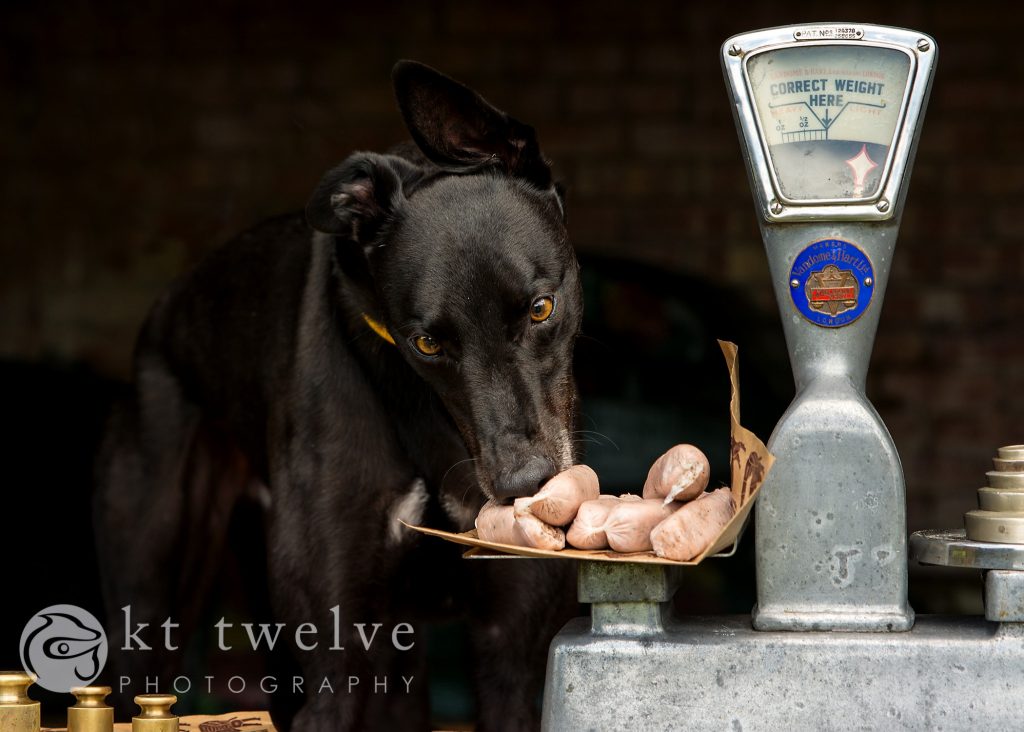 Roy – you really shouldn’t be eating those sausages

Dear departed Pepsi gave me the idea of taking a photo of a greyhound with a curly tail over his back.  Patrick looked absolutely stunning though with his little white tipped tail.  This is taken outside Number 3 Burhill Kennels – I love it! 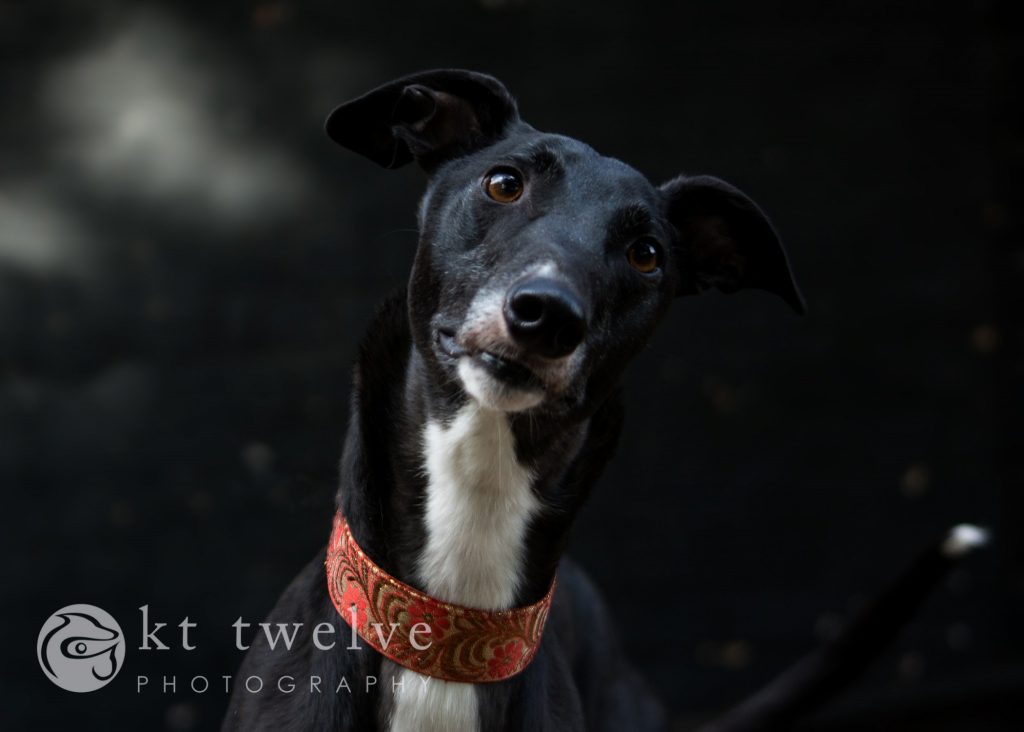 We just needed a gorgeous looking greyhound with an apple balanced on his or her head for this one! Unfortunately, our first choice was unable to do the apple balancing thing.  So here was a second chance for Brody to be in the calendar, guaranteeing extra sales as Jade bought copies for all her friends and family.  Just for fun, I did a couple of Brody’s ‘sister’ Bluebell, prompting the comment from Denise: No chance of hitting the target with those eyes. 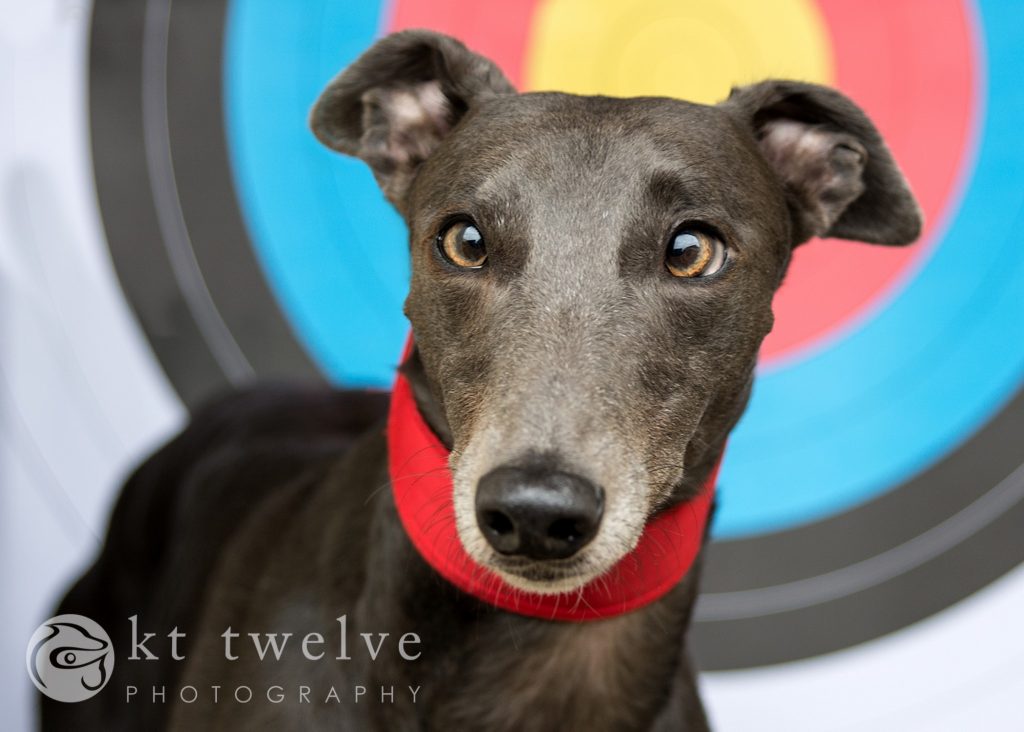 Beautiful Bluebell as the alternative sagittarius